As this strange season heads towards its conclusion, it looks like the media focus is going to be concentrated on the battle for the jockey’s championship. Harry Skelton and Brian Hughes are only separated by a couple of winners and presently there seems a momentum shift towards Skelton largely due to his brother’s horses being in rude health, but the jockey has done his bit and is riding with tremendous confidence. I feel the media people would love a Skelton victory as being Southern centric he comes more into their world, but I hope Hughes retains his title. The Northern scene could do with a boost let’s hope Brian can provide one.

On the subject of jockey’s, I was saying last week how it is a good idea to have an edge by getting a good conditional on your side whilst they are still under the radar. Young Benoit came up trumps last week when steering home, the Lincoln winner… nudge nudge… and John Gosden was stating afterwards that these good claimers have to be used sparingly so reading between the lines, if the Gosden yard put de la Sayette up the horse should be given close scrutiny.

On the jumping front couple of years ago I was banging on about James Bowen and Bryony Frost when they were claiming, and they have gone on to bigger and better things. I think there is another lad worth keeping an eye on whilst his claim is available. Jack Foley has joined the Emma Lavelle yard from Ireland where he was just beginning to make a name for himself. Obviously, he must think there are more opportunities over here and he has already had a winner for an outside yard. If he gets the rides he has the talent to succeed.

Not really a weekend to get excited about this side of the Irish Sea but Haydock has a decent Saturday card more of which later. Looking through the other fixtures I was reminded that Carlisle always had both an Easter Saturday and an Easter Monday meeting back in the day. It wasn’t unusual for horse to run on both days, and I can well remember backing a chestnut gelding called Uncle Isaac to win the two-mile novice chase on the Saturday and then the three-mile novice on the Monday … happy days. I can also remember seeing the then unheard-of Freddie winning the maiden hunter chase before he went on to win some of the big National Hunt prizes. Our older reader will well remember Freddie going down by only three quarters of a length to Jay Trump in the 1965 Grand National, when the Borders horse started 7/2 favourite. By coincidence I came across an old Carlisle race card the other day from the Easter 1950 meeting …I presume my late father was there. The format of these cards never changed for years and they’re light years away from the glossy full of info offering that are today’s card. Mind you it only cost 6d or two and a half pence in current money. I noticed the Dixon’s of nearby Thursby had Victory Morn in the handicap hurdle good to see that the Yellow, Brown and Yellow quartered cap colours are still on the track today. Also, it was an eye opener that the next scheduled meeting was the Cumberland Plate Meeting starting June 28th, unlike these days when there seems to be a meeting every other week. Presumable better drainage and track management allowing more fixtures although maybe there wasn’t the number of horses in those days. 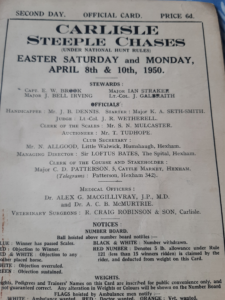 Enough nostalgia wallowing, Haydock has a couple of good chases on Saturday to hopefully put us in funds for Monday’s showpiece the Irish Grand National at Fairyhouse.

The first at 1.30pm is a two-mile contest with nine declared. The top weight Barton Knoll catches the eye with in form Jonathan Burke booked but I feel that the handicapper has probably got him anchored for the moment…the horse not the jockey. I think the six-year-old Prudhomme might be the one to be on. He has only had three chases so might be a little inexperienced, but this would seem a good opportunity to gain his second chase win. Both the trainer and jockey are in form which is a good sign. The race isn’t priced up as yet, but I can’t see Prudhomme being too skinny in the betting.

The other race I like the look of is the 3m2f chase at 2.40. The Skelton horse Debece should be favourite after being well fancied to win at Sandown last month. Once again, I am going to take a chance with an inexperienced chaser Sue Smiths Silva Eclipse ridden by Ryan Mania. Sue Smith’s horses are usually suited by Haydock, even more so years ago when the fences were more demanding, this is only the geldings third chase so connections must think he is up to the task. Looks like he might be around 10/1 come Saturday which is good value.

Monday is the day if you like long distance chases, even more so if you like them in Ireland, with the Irish Grand National taking place. Always tricky to fathom , as a general principle, looking for an unexposed young horse is the way to go. But finding one is the hard part. Top amateur Jamie Codd must be keen on The Big Dog’s chances as I read in the week that he was preparing to do his lowest weight for twenty something years if top weight Tiger Roll stays in and the weights don’t go up. Surely that’s a tip in itself? Whatever you pick good luck.

This time next week hopefully all systems go for a successful Grand National meeting…. I am still sweet on my selection from back in November Any Second Now…he is now 10/1 second favourite behind Cloth Cup…. when he was available at 25s. Yes, I did.