Good things come to those who wait – and for our Havana Mariposa syndicate members, the wait was finally over yesterday. 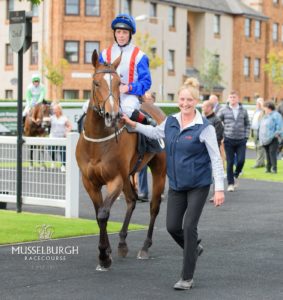 After almost a year of patiently waiting, Hope Eden Racing members (and the management!) were overwhelmed with joy yesterday as Havana Mariposa took a win on the course at Musselburgh, edging ahead of Kevin Ryan’s How Bizarre to get past the post by just a neck ahead.

The 3-year-old’s win under jockey Ben Curtis came after a week with two entries for her. Having been entered to race at both Catterick and Musselburgh, trainer Karl Burke decided Scotland was the destination for our filly. The decision to withdraw her entry at Catterick ultimately proved to be a good choice.

Despite Musselburgh practically being a long haul destination (just without the sun!) for some of our syndicate members, a good number of Mariposa’s loyalists turned out to watch her race.

Racing Post’s Michael Robson reported on Havana Mariposa’s victory adding a tribute to our excited members with his Thought of the Day:

Owners are the lifeblood of racing, so it was pleasing to see the enthusiastic team behind Havana Mariposa celebrate their first success

A long overdue victory for our young syndicate, we are hugely excited by Mariposa’s win yesterday and we look forward to meetings next week with Harperelle set to run at Leicester on Tuesday 4th September. Another win on the cards, perhaps? Maybe.

A small amount of remaining shares are available immediately in this 3-year-old bay filly, trained by Karl Burke. To enquire about becoming an owner of Havana Mariposa, please contact our Sales Director, Ben Percival at bpercival@hopeeden.co.uk or call him directly on 07775 693 320.