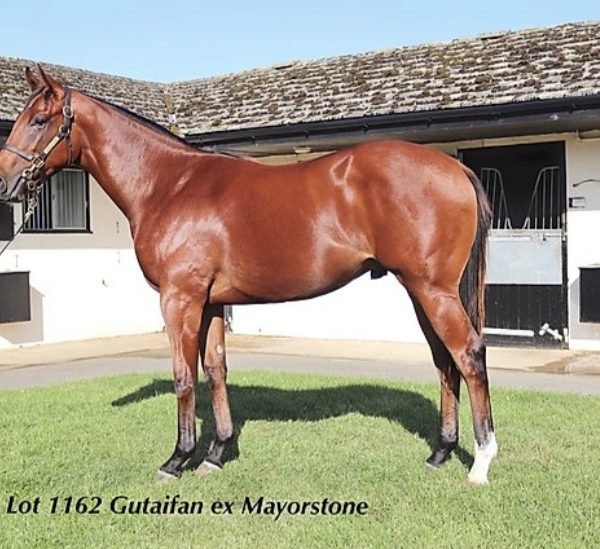 Our newest addition trained by multiple Group 1 winning trainer Karl Burke out of his Spigot Lodge Stables in Leyburn, North Yorkshire. This Gutaifan Colt not be in better hands. Karl has a fantastic record with his 2 year-olds and over recent seasons become one of the country’s most successful and sort after trainers following the exploits of top performers LAURENS, HAVANA GREY, QUIET REFLECTION, ODELIZ and UNFORTUNATELY.

Not only is this Colt blessed with a trainer of Karl’s ability but his breeding boasts numerous winners which makes this surely a successful and winning combination.

His sire, Gutaifan, was an exceptional Group 2 winner at 2 and 3 years of age. At stud as a first season Sire, he supplied more winners than any other first season sire at 28 winners. In addition, 5 of his 2-year-olds are now rated 90+.

His dam Mayorstone, Dam of one winner Lady Dancealot from 2 runners.  Lady Dancealot currently has a RPR of 96 but has previously ran to a 100 Rating. She was the winner of 5 races over 6Furlongs and placed on 16 other occasions.

Karl Burkes latest comments: “He is a very strong forward going colt and has done some easy work and has done that very nicely on the bridle. If he continues to progress the way he is going he will be out on the track early in the season.”

Contact us to request a copy of Gutaifan Colt’s pedigree.

Training
Gutaifan is trained by Karl Burke in North Yorkshire.

Get in touch with our Gutaifan Colt’s syndicate manager.