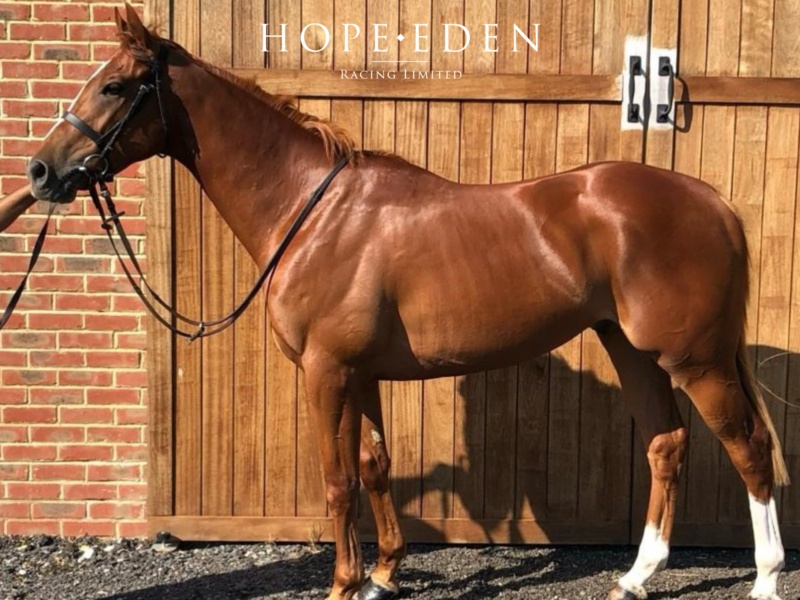 “We are really pleased with him at home as he is showing us plenty of promise. He’s a nice, mentally mature, straight forward son of Al Kazeem who looks absolutely set to be a fantastic 3-year-old. He has been on a few away days with some of our others which he has enjoyed and as mentioned, we are very happy with him. He’s been allowed some extra time to strengthen and we are now looking forward to getting him out”

Raffles Rebel is out of the Daggers Drawn mare Go Between, who won twice for trainer Ed Dunlop as a two and three-year-old. She has since gone on to produce four winners, most notably the useful sprint handicapper Go Nani Go. He was a six-time winner who reached a peak mark of 87.

Go Between’s other progeny include Hell Yeah, who won a mile and a half Kempton maiden on his only racecourse appearance. He had been a 70,000gns yearling purchase, who began his career with Godolphin (although he never raced for them), whilst the aforementioned Go Nani Go changed hands for £64,000 and another sibling realised 58,000gns.

A quick glance at the extended family quickly explains the commercial appeal of this pedigree.

Go Between is a half-sister to the Grp-2 Flying Childers Stakes heroine Wunders Dream, who went on to produce two black-type animals including the Listed winner Inyordreams, and the Grp-3 winner Grecian Dancer, who went on to foal the Grp-3 winning and Grp-1 placed Muffri’ha. Further siblings of Go Between include the Listed-placed Nocturn and the dam of the Listed winner Fashion Queen.

On this occasion Go Between has been paired with Dubawi‘s multiple Grp-1 winning son Al Kazeem. Trained by Roger Charlton, he earned four Grp-1 successes during a stellar racing career and has more recently overcome low fertility levels to carve out a reputation as an extremely exciting sire.

His best runner to date is Aspetar, who won the Grp-1 Preis von Europa in Germany last year and returned to form when taking the Grp-2 Sky Bet York Stakes in July. Other smart produce includes the exciting two-year-old St Lawrence, winner of the Listed Denford Stakes and fourth in the Grp-2 Superlative Stakes this season, the French Listed winner Usak and the Listed-placed sprinter Golden Spell.

Although a middle distance performance himself, Al Kazeem has quickly demonstrated his ability to get quality runners over varying trips, and this trait suggests he is a very good match for the similarly versatile Go Between.

Raffles Rebel is a strikingly attractive individual with high-class pedigree credentials. He promises to make his mark this year, but should also continue to develop and improve as he gets older.

Contact us to request a copy of Raffles Rebel’s pedigree.

Raffles Rebel is available for syndication.

Get in touch with Raffles Rebel’s syndicate manager.