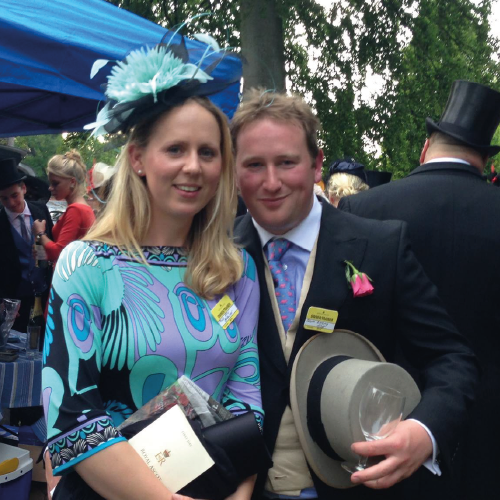 Ali & Sam Stronge are one of the newest, most exciting young training prospects

Ali began her involvement with horses back at her family home in Gloucestershire. The family farm was the base from which she competed in the showing ring, hunted with the Ledbury and represented her country in Three Day Eventing.

She also gained valuable experience prepping NH store horses for Tweenhills Stud and being part of Rathmore Stud at sales both in the UK and Ireland.

After moving to Eastbury, she ran what was initially a pre-training yard with Sam here at Castle Piece, with clients such as Paul Nicholls, Nicky Henderson, Charlie Longsdon, Favourites Racing etc just some of the big names in racing that sent horses to us to be prepared for the track.

Since being granted her full licence in the summer of 2013, Ali has made rapid progress with impressive strike rates ever since, showing that she has the ability to train over all codes.

Sam began in horses at an early age; a fun, easy-going person, he was born into horses, with his parents being involved in every aspect of equestrianism. His mother was showjumping at the highest level representing her country, his father Robert was a successful National Hunt jockey and then racehorse trainer.

Sam riding before he could probably walk showjumped at an early age until getting the taste for racing and began his career at David Nicholson’s academy at 14 years of age with a solid grounding from one of the last schoolmasters of our era. He began his race riding career as an amateur at the age of 16 becoming one of the leading amateurs before turning professional. Quickly into his stride, he was the offered the position to join champion trainer Paul Nicholls, becoming  stable conditional and having many successes together, riding out his claim at the age of 18.

A battle with the scales and unable to keep his weight low enough led to a short career and Sam retired from race riding at the age of 23. During his riding career Sam rode around 150 winners for many top trainers and owners.

Sam’s retirement lead him to a new chapter where he used his experiences to becoming a jockeys’ agent. Having race ridden at the highest level this gave him a perfect understanding of what it takes to be a successful jockey and guide potential stars. He built up a formidable team and had several of the leading jockeys in the country on his roster, achieving thousands of winners with his team and success at the very top level including champion conditionals, Cheltenham Gold Cup winners, King George, Hennessey, Beecher Chase, Betfair Chase and many Cheltenham & Aintree Festival winners.