Everybody seemed genuinely surprised last weekend when Richard Johnson announced his immediate retirement. From the subsequent tributes Johnson appears to have been equally well respected both on and off the track. Hopefully, he finds a role in retirement that gives him as much satisfaction as race riding obviously did. So, the curtain is coming down on what has been a golden generation of jump jockeys Johnson, McCoy, Walsh, Geraghty and Davy Russell only the latter is still riding and because of injury has not been jocked up since October 2020. The next boys coming through will need to be good because those mentioned above are a hard act to follow.

I have only been to the Grand National meeting on three occasions but each one left a deposit in the memory bank.

The first visit was 1977 when Red Rum galloped to his historic third win. Not only that but those two stalwarts Monksfield and Night Nurse fought out a titanic dead-heat in the big hurdle. From our vantage point at the top of the stands the combatants seemed miles away but at least we were there. To round the weekend off we even managed a visit to Ginger McCain’s stable in Southport to congratulate the winner…. I think it made his weekend. 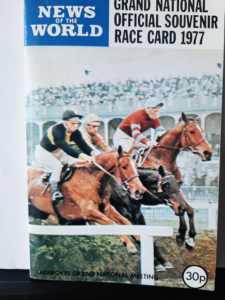 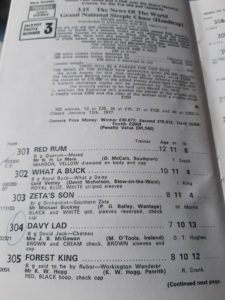 To keep this in chronological order my next trip down was in 1986 when I was the guest of one of the local banks on the Friday before the big event. “Pick you up about 10.00 “ was the promise …. come 10.00 no show …. followed sometime later by a phone call “My cars conked out can you pick me up?” … yep, all downhill from there. A mad dash down the M6, no mean feat in a Triumph Toledo… At least a free lunch but unable to drink, no winners and a long drive home. Corporate entertaining, don’t you love it. But the best part of that trip was bumping into a mate who was convinced Rod Simpson’s grey Brunico was the one to be on in the 4-year-old hurdle after the horses’ s promising run at Cheltenham. Not only did he lose his shirt but most of his wardrobe as well which made for a chilly return north with only his legs left to tuck his tail into! He is still punting though……

Third visit was the best of the lot. 1990 and I had managed to win a competition in the Independent newspaper first prize being an all-expenses paid trip to the great event. It was some day, champagne breakfast on train from Euston…. drinks fuelled lunch, backed the winner Mr Frisk at 100-6…more champagne plus afternoon tea…then dinner on the train home with yes, you’ve guessed it more drinks. Poured off the train at Euston. I can still remember my wife’s words back at our hotel as she switched off the light….” You don’t normally wear those shoes in bed” …. happy days.

Right enough of the good old days what about this year’s renewal? Well, I don’t see any reason to change from my original ante post selection ‘Any Second Now’, trainer Ted Walsh has given his challenger a similar preparation to his previous winner Papillon. Both had the pace to win over two miles but also the necessary stamina. A horse needs a bit of toe to lie up early in the race these days and ‘Any Second Now’ should be able to do that and given a little luck in running won’t be far away.

The race is a really top class handicap these days and unlike earlier years you can’t rule anything out unless the ground becomes either extremely fast or testing. Cloth Cap is a worthy favourite, and it would be a typical National story if Tom Scudamore could follow his grandfather onto the roll of honour. The Scudamore name has long been part of the fabric of jump racing, a win for Tom on Saturday would be a fitting result. At around 7/2 the favourite is too short for me, so I am tempted to back up my ante post bet with a few quid on Burrows Saint from the Willie Mullins yard. Still only eight he won the 2019 Irish Grand National which was a good performance for a six-year-old. The key to this gelding is the ground as he prefers better going so hopefully the forecast good to soft conditions will suit. He is only around 9/1 second fav at time of writing but he has solid form to back up his price.

If you must, really must go for a left field selection try a few bob on Sub Lieutenant with Tabitha Worsley riding. She is the only jockey riding in the race on Saturday with a one hundred per cent record over the National fences, one ride one win. The horse was bought out of Henry de Bromhead’s yard to improve the quality in trainer Georgie Howell’s stable …. not difficult I hear from the cynics but what a story if they pull off a shock result. At around 100/1 you might just get a decent spin for a small wager.

The three miler at 4.15pm which precedes the National is sometimes overlooked but it’s always a good contest. The Mildmay fences take some jumping as they usually go a good clip from the start. Surprisingly, I am sweet on the chances of a horse that fell last time out. Tom Lacy and Jonathan Burke have been among the winners of late and they team up here with Johnbb who has a nice racing weight of 10st 9lbs. This lad has a good run over these fences in November 2019 under his belt so hopefully the experience is put to good use at the weekend. He hasn’t run since his fall on Boxing Day, but he has won first time up when back from a long break so the layoff shouldn’t be a worry. Hopefully, he will be double figure odds and looks a decent bet to put us in funds for the big race.

Win or lose lets hope all the horses and jockeys get back safely and the big race provides the spectacle the race deserves. No doubt the keyboard warriors of social media are poised for the first opportunity to criticise the event lets hope they are denied their opportunity.

Good luck whatever you fancy.